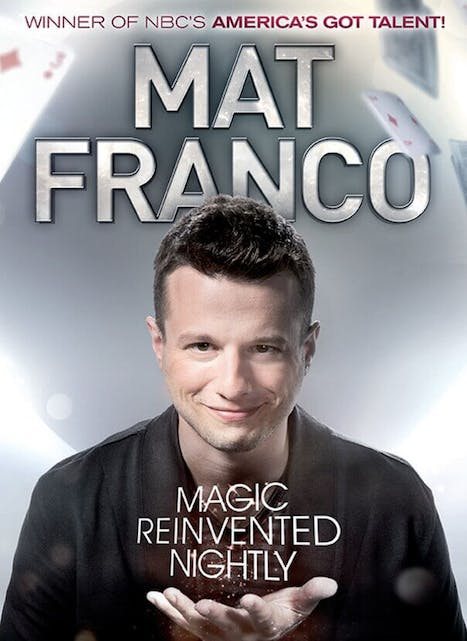 MAGIC REINVENTED NIGHTLY at The LINQ Las Vegas – As the first and only magician ever to win NBC’s America’s Got Talent, Mat Franco takes an innovative approach to magic-making that’s driven by pure joy. Almost entirely self-taught, the 27-year-old Rhode Island native began developing his own shows before the age of ten and took the stage at the Riviera Hotel & Casino in Las Vegas by the time he was 15.

Are you looking for the best magic show in Vegas? Mat Franco’s Magic Reinvented Nightly show will amaze any sleight of hand fan. Franco, a lifelong magician, is not only a master of numerous magic tricks but an expert at connecting with audiences as well. Franco tailors his performances around those who are with him on any given evening. Magic Reinvented Nightly perfectly demonstrates how his talents in magic are complemented by his incredible ability to make you feel like the whole show was created just for you.

The Life of Mat Franco

Born in Johnston, Rhode Island, Mat Franco grew up with a fascination for magic shows. With the help of his grandmother, he began practicing his own magic tricks when he was in kindergarten. At 12 years old, he studied performance art in Vegas. The first Mat Franco Las Vegas performance took place when he was only 15 years old as part of a showcase featuring young and promising magicians.

After returning to Rhode Island, Franco finished high school and moved on to the University of Rhode Island to complete a degree in business administration and a minor in communication studies. After graduating, he traveled to perform at colleges around the country. He did this for four years before appearing on―and winning―America’s Got Talent in 2014. Since then, Franco has recorded his own television special on NBC, received an award for the best Vegas show, accepted a key to the Las Vegas Strip, and had a Vegas theater named after him.

The Best Magic Show Las Vegas Has to Offer

There are innumerable reasons Mat Franco has won awards like Best Show on the Las Vegas Strip. While his shows are family-friendly, both children and adults alike love the unforgettable experience of these shows. The tricks are simple enough for everyone to appreciate but complicated enough to leave everyone in awe. Audience participation draws you in, the continuous flow of incredible illusions keeps you enthralled, and Franco’s charm and energy holds everything together.

Fun, entertaining, and amazing are some of the most common words used by Franco’s fans to describe the show. From laughter until the tears pour out to shock and astonishment, the range of emotions is stimulating and leaves the audience wanting more. Franco’s show, Magic Reinvented Nightly, could easily be seen multiple times as each time gives a different and new experience. Affordable ticket options mean that this marvelous entertainment opportunity is easily available for any magic enthusiast. Whether you are a Las Vegas native or visiting for a few days, Mat Franco’s performance is a must see.

Get Your Mat Franco Tickets With Best Vegas Attractions

Best Vegas Attractions offers tickets to all Magic Reinvented Nightly shows at The LINQ Las Vegas. With this intimate venue, no seat is a bad one. Get a great view no matter which area you choose, but be sure to get your tickets before they sell out. Showtimes are 7:00 PM and 9:30 PM. Whether you prefer a booth, table, or traditional stadium seating, all ticket options are available through our website.

When you book your tickets with Best Vegas Attractions, you have access to a special discount. Purchase your tickets today and save on Mat Franco’s show Magic Reinvented Nightly!

Expert Tips to Know Before the Show

Throughout the show, random audience members may be asked to come on stage. To improve the chances, insiders recommend wearing pants and being open to a night of fun.

Magic Reinvented Nightly often sells out, so be sure to plan ahead―especially if you want seating near the front (in an attempt to figure out those amazing illusions). Family friendly holiday seasons always bring the crowds to his show. Lock your tickets in today.

Mat does a meet & greet after his show. This is the perfect add-on for all you mega fans of Mat Franco. Space is limited, and we recommend booking in advance.