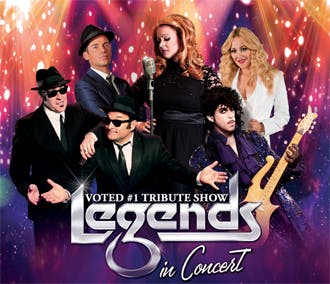 The History of Legends in Concert

You don’t make it 35 years in show business unless you know how to keep people entertained and coming back. The Legends in Concert Las Vegas show has accomplished that goal, all while presenting music and showmanship that’s appropriate for the whole family. From Elvis Presley to Bruno Mars, you can find something for everyone onstage in the Legends Theater at the Tropicana Las Vegas.

On May 5, 1983, a little show began a six-week run at the Imperial Palace Hotel & Casino in Las Vegas, Nevada. Since then, more than 30 million people from all over the world have enjoyed the splendor, the pageantry, and the energy of the live band, dancers, and vocalists. Costumes that match the period of the act, detailed sets worthy of the Broadway stage and special effects amaze the audience. The experience is enhanced by 3D effects, lasers, and an astounding sound system.

Legends in Concert is now the longest running independently owned production show in the history of Las Vegas. Fans enjoy music from almost every genre, including tributes to artists gone too soon, such as:

High Praise for Legends in Concert

Over the years, Legends in Concert has accumulated an impressive array of awards, including Show of the Year, Entertainers of the Year, Grand Slam, and Show of Shows from the International Press Association. In October of 2018, it was honored as Production Show of the Year at the Casino Entertainment Awards.

When you start to plan your trip, keep these tips in mind from experts and long-time fans of the Legends in Concert Show.

Music doesn’t get any better than what you’ll hear at a Legends in Concert show. To get started planning your trip, book your experience through Best Vegas Attractions. You’ll find not only the best rates on this show but on other Las Vegas attractions as well, so you can round out your experience with a variety of activities.