CSI: The Experience is now open in the MGM Grand – The Underground! 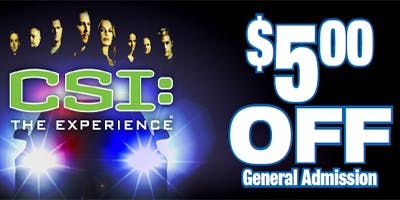 About CSI: The Experience

CSI: The Experience is an interactive attraction immersing guests into the world of crime scene investigation! As the latest CSI recruit, your investigation skills are put to the test. Through hands-on activities, you will collect evidence, analyze clues and submit your findings as you try to solve the case.

Crime Scene 1: A House Collided
A car has crashed into the living room window. In the vehicle, you see a man in the driver’s seat slumped over. Your observation skills are put to the test. What do you see? Let the evidence speak for itself.

Crime Scene 2: WHO GOT SERVED?
Behind an old Las Vegas motel, a young woman has been found dead in the alley. She lies sprawled in an overflowing dumpster. Among the trash, you find several items that may have belonged to the victim. But be careful. Assumptions can lead you astray. Keep an open mind and follow the evidence.

Crime Scene 3: NO BONES ABOUT IT
Near a desert canyon, a passing hiker noticed a human skull. As the investigator, you’ve been called in to decide how to uncover these buried secrets of the past. The evidence tells the story when the victim cannot.